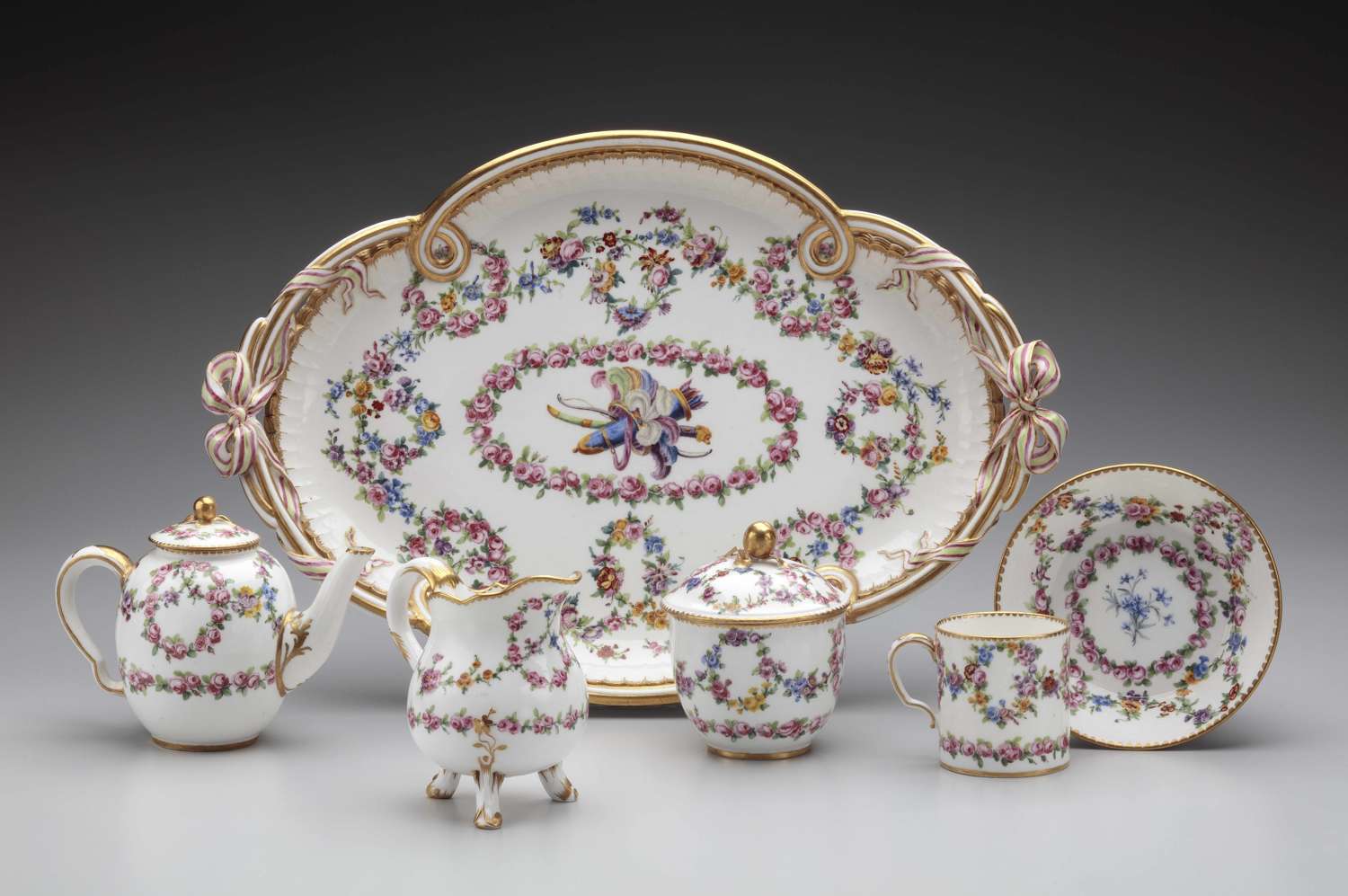 Tea services, or déjeuners, were first produced at Vincennes in 1753. Varying in composition depending on the size of the tray, they consisted of between one and four cups and saucers and most often a milk jug, a sugar bowl and a teapot; more rarely did déjeuners include a tea caddy or a coffee pot. The name of a déjeuner derived from the model of the tray within the set. Thus, a tea service with a plateau à baguettes was referred to as a déjeuner à baguettes.

There has been some uncertainty as to the name of this tray form in the eighteenth century and it has been variously catalogued as “plateau ovale polylobé” and “plateau à rubans.” It is known that the form was made in only one size and that no plaster model has survived. The current attribution to the name baguette is mostly based on an order in October 1773 by Monsieur Gantier, perhaps on behalf of Paul Petrovich, Grand Duke of Russia, who purchased a “déjeuner à baguette fond d’or emaillé avec attributs, armes et guirlandes cy 840 [livres],” [tea service à baguettes gold ground, enameled with attributes, weapons and garlands here 840 (livres)]. It probably included a tray of the same form as the present example, decorated with the Duke’s coat-of-arms, which is now in the Cité de la céramique, Sèvres. The word baguette, meaning piped or molded, may refer to the form of the shaped rim, which mimics the piping on upholstery.

There is no mention of this shape in the Sèvres inventories, which from the 1760s often grouped pieces together in categories under generic names of plateaux à ornements or plateau à ornements et à jour (ornamented and pierced trays). On the other hand this shape is mentioned in both the overtime records and the sales records. The first mention of a déjeuner à baguettes comes in the overtime records in 1769 in relation to the painter Méreaud jeune. There are even a couple of references in the overtime records to a tray à baguettes et rubans, which even more accurately describes this model. The sales records, notoriously lacking in detail from the middle of the 1760s on, nevertheless show a few déjeuners à baguettes being sold between 1773 and 1777.

A charming anecdotal feature of this set is that not long after its purchase in 1775 it would appear that the milk jug was damaged, and a replacement was ordered from the factory seven years later. The owner of the set was obviously concerned to get a well-matching piece, going so far as to request that Bulidon, who had painted the rest of the service, should also decorate this replacement element, in order to maintain a consistency of design throughout.